The First race of the day was year 3 / 4 Girls, in a close race a pack of 5 girls left it till last 300m to decide who would be crowned champion and it was Zoe Allen from Chieveley who took it, with a close battle for runners up from Falkland Helena Van-Blerk and third Clare McConnell from St. Gabriels, in the team event Whitchurch took the honours with Falkland just behind and Hermitage third. A total of 266 girls finished.

Race two the year 3 / 4 Boys  saw a big field of 308 finishers, leading from the start Tyler Chandler-Mason from Robert Sandilands came home first with Kanechi Akosa from Falkland taking second and Oliver Hamlin from Chieveley third place, while in the teams Thorngrove took the win but four schools tied for second spot so on count back with fourth scorer home it meant Kintbury took second and Falkland third 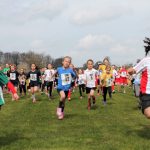 The Year 5 / 6 Girls race Josie Robertson set of on a charge to come home some 70metres clear the biggest win of the day from Cold Ash school, Skye Wheatley from Theale just held of Phoebe Ryder from Woolton Hill school for second and third places,270 girls finished this race with Woolton Hill taking the team award by just 3pts over Cold Ash and St. Gabriels taking third.

The biggest race of the day was  year 5 / 6 Boys with 330 finishers, Joseph Sheridan from Speenhamland took the victory with a storming finish, with a close battle behind Nathan Salter Woolton Hill took second and Jacob Woods St. Nicolas taking third place, St. Nicolas took the team award just ahead of Falkland  with Spurcroft third, beating Whitchurch on count back on next best scorer 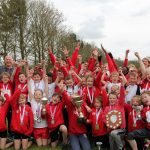 Overall the top school of the day was defending champions Falkland 288 with St. Nicolas taking runners up 543 and Thorngrove third 555.

The Hampshire Trophy went to Thorngorve school with Woolton Hill taking runners up, The Small Schools Cup went to Brightwalton School and Cold Ash St. Marks taking runners up, the B team award went to Falkland and finally the Most Improved School was awarded to John Rankin

Team Kennet would like to thank its sponsors for the event Porterfireld Public Relations for 10 years sponsoring the event, and to new sponsors BST Gym and also to South-Down Trophies and Gazkaz for supplying Trophies and Printing work, and Kennet Radio for advertising the event on air.

Just a quick note to thank you and everyone who had a hand in organising and running the Cross Country Championships.  We are so proud of our children’s achievements today and they would not have been possible without everything that goes on behind the scenes.  The organisation was super and parents were particularly touched by the kindness shown to individual competitors which ensured a real sense of inclusion. – Mel

I’d like to congratulate you and your team for once again organising such a fantastic event. It always amazes me how you all manage to make such a vast event run so seamlessly. All of our pupils were so proud to have competed in the biggest cross country in the country and I’m sure it’s an experience the won’t forget. – Gavin

Many thanks to the organisers, volunteers and sponsors for putting on another brilliant event. 1200 children going home happy after a great afternoon of sporting endeavour. Get’s better every year. – Chris