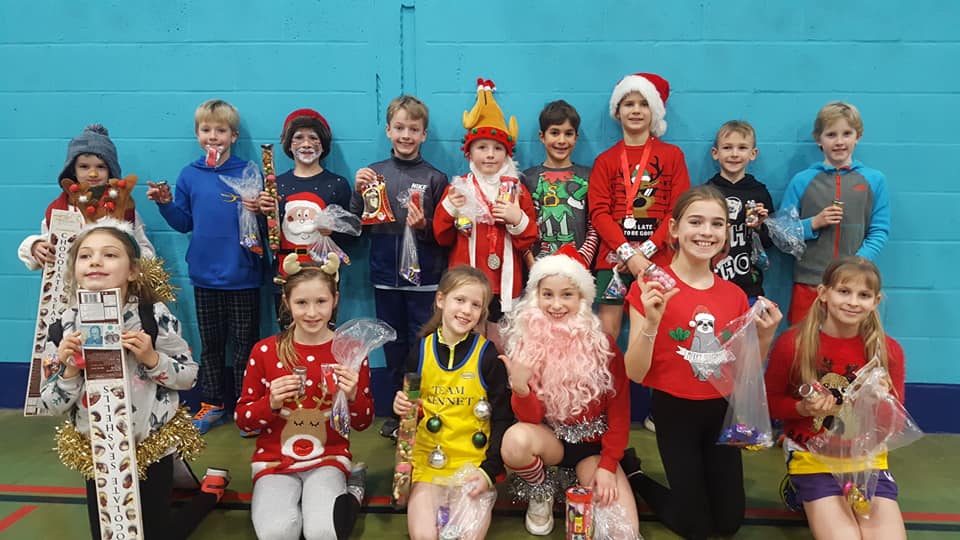 Team Kennet last Wednesday Night before Christmas Theme night was another success, over 60 young Juniors did the Christmas Session in the Sportshall, with tasks all night to earn prizes, The Best Customs went to  Imogen Cowell and Luke Styles with runners up Isla Ladds and Joshua Ladds and third places to Izzy Carrol and Flynn Murray.

The guess the numbers game, the first number 51 was guessed in less than a minute by Anna Hall, next number was 20 which was won by Luke Styles and finally last number 88 was Ethan Knight.

The Challenge games was to hit the targets set his in Vertical Jump which was 45, Speed Bounce 66 in 20 seconds, Stretch n Reach 35 and to achieve 2 Horse Shoes on the target from 3 tries., 12 prizes were up for grabs these went to Tyler Vines, Louise Colby, Jonathan Chism, Nicole Brooks, Kaan Tugcetin, Aiden Fleming, Zac Humphreys, Harry Fenner, Harry Barnes, Bethany MaClean, Ben Daley and Luke Styles taking his third prize of the night.

Finally it was the Santa run, 5 lines of relay teams set up to run down and get a few sweets at a time, they were joined by the older group from the gym.

All the prize winners came out to be given a envelope each, 3 had cash prizes, they were given a chance to trade for a brown envelope which had £20, one lucky person did swap and won the £20. All the winners had to open the envelopes at the same time.