The Park Run Challenge was another success again and led on from the September endurance month. Male numbers were well up on last year but females were down by half.

Jacob Woods got the highest percentage overall just ahead of Eve Brown both under 11s winning each age group.

Rebecca Thomson got the better of twin sister Georgina by ..11 percentage both girls under 15 age group.

On the male side Cameron Langley u15 got second, but for third .46 percentage separated 5 athletes, with Jacob Avery taking third spot. 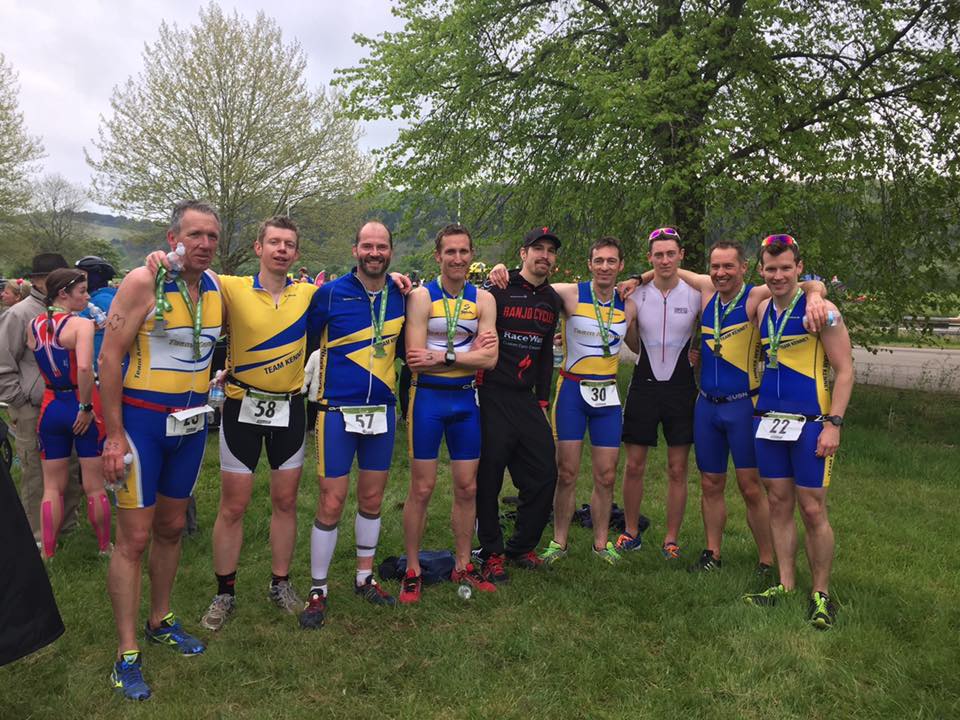 Team Kennet had 6 athletes representing Berkshire u13 team at Kingston on Sunday in the Inter Counties match.

Stuart Bladon came close to winning in the Boys as he leapt to 1.50 in the high jump only to be beaten into 2nd place on count back. For the girls Kira Angell won the B string of the Javelin in a new p.b. of 26.21 to help the girls come 3rd overall in the match while the Javelin A string was club athlete Millie Quaintance where she threw 24.96 to come 6th.

Mai Brown took full control of the B string 1500m as she earned herself a new best time and winning the race in 5.07 while Mia Eldridge had a busy day doing two events. She was the A string in the Shot, her favoured event, coming 3rd with 9.11 and B string in the Discus where she threw 21.78 for 4th place. Zachariah Montgomery earned himself a massive best throw of 8.22 for 7th place in the B string of the shot.

Well done to all the Team Kennet athletes who took part.

It was the males that shone in today’s match. The under 13 boys winning their section on the track and Stuart Bladon won his 800m by a home straight in 2.22.7 as he broke the club record and with Ryan Cannons winning the B string 2.38 for a great Double. Both teamed up in the High Jump to record another Double win with Bladon 1.40 and Cannons 1.35. Zachariah Montgomery came a close 2nd in the Shot 7.24 with a B string win coming from Connor Sitton 6.27 and Sam Davis made it another 2nd in the Discus 17.55 with Montgomery just behind to take a B string win in 17.13. Stuart Bladon leapt to 4.09 for 2nd in the long jump which was matched by Cameron Langley in the B with 3.78. Daniel Hockaday could only get 4th in the 75m hurdles with Calvin Suppo taking 2nd in the B string, Both Toby Thomas and Joshua Sells scored good points in the 1500m and in the sprints Suppo, Tom Hills, Hockaday and Langley could only get 4th and 5th places.
The under 15 boys secured another team win and another 800m double came from Dominic De Monte in 2.18.79 p.b., with Evan Hartley making a great return after a long injury with a superb win in the B string 2.21.41. Hartley made it a win earlier in the day in the 80m hurdles in 12.3 with Ben Armstrong making it another Double in 15.17. More double wins came from Dylan Suppo 5.39 and Ben Armstrong 4.57 in the Long Jump, Rafael Ribeiro 43.66 and James Hills 30.91 in the Javelin while Max Gibbs took another win in the High jump as the club dominated this event in all areas with 1.55. In the Shot both Ribiero and Max Carnell added two second places while back on the track in the 300m race a photo finish had to settle things and both TK lads came 2nd in their strings with best times Max Gibbs 41.75 and De Monte 42.42. The Sprints were of high quality with Dylan Suppo 3rd A string 12.23 and Max Carnell 2nd B string 12.78 and in the 200m Suppo 24.61 for 2nd and Carnell 25.84 for third B string. The Relay quartet of Carnell, Suppo, James and Gibbs came in second 51.82.

The under 13 girls got back to winning ways again dominating the middle distance as Mai Brown won her 800m in a new best time of 2.31.56 with Izzy Hole 3rd in the B string 2.46.36 and in the 1200m a superb last 100m from Anna Pettit won her race in 4.07.72 p.b. with Izzy Brown 3rd in the B string. A great double came in the high jump Anna Pettit jumping out of her skin to smash her best with 1.35 and new comer Tabitha Hyslop 1.30 and another double win  came in the Shot with Mai Eldridge 9.23 and Maddi Barnes 6.70. This was matched in the Discus with Eldridge 20.85 and Kora-May Stevens 14.68. Further points were won by Sophie Stancombe and Ellen English in the Sprints.
The under 15 girls came away with a great second place in the team event with best points coming from the 800m as Holly Donohoe came third in 2.30.83 and Amelia McKay 2nd B string 2.32.66. In the 300m Donohoe added another 3rd place 45.76 and Georgia Featherstone 2nd in the B string 47.59 and Georgia Featherstone added a second in the B string 200m with Callie Leighton adding points in both 100 and 200m races. New Comer Charlotte Booker earned points in both high jump and shot as Susie Drake did in her High Jump and 1500m
The under 17 women had tough opposition Georgina Bradford produced another best time in the 800m coming 2nd in 2.21.29 with Carys Cox winning the B string in 2.23.48 and Cox later won the 300m 44.40 and Jordan Donovan taking the B string 45.36. Donovan won the long jump in 4.87 with Bradford 3rd place in the B string, which she also achieved in the Discus 19.92. In the sprints both Natasha Roue and Harriet Allan came third and in the 200m Donovan 2nd A string and Roue 3rd in the B string.
The under 17 men had to settle for 4th place in the team, Thomas Murphy clearing 1.65 in the High jump for 2nd A string with Joe Osler winning the B string 1.60. Joe Osler making it a second in the Shot 9.63 with Christian Randall 8.96 for a B string win. In the Discus a double win came from Randall 25.95 and Alex Davis while Randall made it anther win in the Javelin 41.44 and finally the long jump Murphy came 4th 5.14 with Osler 2nd in the B string 5.08.
In the under 11 quadkids section, the boys ran out overall winners with 903 points with Ben East taking individual 1st place with Harry Booker 5th and Thomas Joyce 7th. The girls came 3rd overall with 700 points with Francesca Young (4th) and Isabel Stevens (9th) making the top 10. Individually Francesca took 1st place in the long jump and 3rd in the 75m while Isabel took 2nd place in the vortex and Harry and Ben dominated the boys vortex taking  1st and 2nd place by almost 10m.

Team Kennet’s U20’s Javelin Thrower Luke Angell rounded off his high flying season with a win at the Biggleswade open competition on Saturday. Lying 2nd after 3 throws, Luke pulled out a big 4th round throw to take the win with 58.67. Luke has represented Berkshire u20’s and seniors at Inter-counties level and is currently the South of England U20’s Champion after winning at Crystal Palace in June but the highlight of his year is representing England at the Welsh International Championships in July coming a worthy 3rd place. Luke will now go into winter training and coaching to get prepared for his last year as an U20 next year.

Team Kennet’s Luke Angell took up the challenge at Bedford on Saturday in the English Athletics U20’s & U23’S Championships & World trials. Luke took on a number of top 10 Javelin throwers in the country in the Men’s U 20’s section. Up against the best, Luke came in 4th with a throw of 57.61. With less that 1.5m distance between 2nd & 4th Luke has firmly put Team Kennet out there, and at only 18yrs old Luke is still progressing. Congratulations.

Team Kennet have made Two Time Olympic Athlete Jessica Harrison an Ambassador Of Team Kennet for her performance in international triathlon over 26 years and being involved in the club throughout her career. she is an inspiration to all junior and senior athletes around the globe and will have time now to visit the club as shes now retired from World Triathlon competitions. Jess came and helped out with the Junior Track and Field  Championships on Wednesday Night as nearly 200 Youngsters attended, she was presented the framed picture with upto date club wear at the presentations later that evening before handing out medals to the winning athletes.

Last Friday saw James McLaughlin compete in the U15 British Triathlon Interregional Championships at The National Water Sports Centre in Nottingham.  James had qualified along with Sammy Hart (another Team Kennet and NDSC teammate who unfortunately was unable to make the event) to represent the South Central region (Hampshire, Berkshire, Buckinghamshire and Oxfordshire) against the 11 other English Regions, Wales and Scotland.  The event was part of the British U20 Triathlon Festival.  James who competes for Team Kennet Athletics and Triathlon Club and Newbury District Swimming Club is the first athlete from either of these clubs to compete at the championships.  The event which followed the same rules as the elite triathlon events that the Brownlee brothers race in, started with a 350m swim from a dive start followed by a 5km drafting cycle and finally a 2.5km run.  James had a good swim coming in towards the back of the main swim pack.  The cycle leg was difficult as it was so short and although he managed to overtake a

number of competitors he was unable to get into the main cycle pack.  Finishing off with a strong run though he was soon picking up places coming through the field to finish in a fantastic 21st place in the UK, in his first year in the age-group.

Team Kennet had three athletes compete for Berkshire senior team in the UKCAU Inter Counties Match at Bedford over the weekend.

Nathan Gillis competed in the 800m and had to qualify to reach the finals the following day, he did this finishing 2nd in his heat with 1.54.21, the following day he finished 6th in a tactical race with 1.56.39

Luke Angell was just short of his best distance in the Javelin, now getting used to higher level competition came 6th with 58.47 and finally Sam Randall came 5th in his heat of the 400m in 51.34 but not progressing any further.

Team Kennet Athletes faired well on a warm but very damp course in Slough in the annual Berks, Bucks and Oxfordshire Cross Country Champs on Saturday.

Nathan Gillis Struck Gold as he won the Under 20 age group competing in the Senior Mens race finishing 14th overall.

In the lower age groups, the under 17 womens team came 5th with Georgina Bradford 14th with Chloe Scaplehorn 21st and Carys Cox 22nd. The under 13 girls had two teams Mai Brown first home in 27th with Izzy Hole 29th and Lucy Wells 31st bringing the A team home in 9th place, Bethan Philp 62nd, Emily Collins 65th and Phoebe Hoaen 67th made up the B team coming 20th and Olivia Lamb was the other club athlete in 72nd one of the biggest fields ever for the under 13 girls.