Kirsten Fraser took part in the National Biathle Championships on 4 August at Salford Quays, Manchester. This was her first ever Biathle. A Biathle is a run, swim, run event with transitions.

As a result of winning the Under 13 girls event she has been selected to represent Great Britain in the mixed relay and individual event in St Petersburg, Florida in October.

Gavin Mclaughlin took part in the 50-54 age group which saw him finish 24th out of 130 competitors and 4th British athlete home.
In the younger 35-39 age group Simon whatson was amongst some very elite men with some 150 competitors coming home in 79th place.

Five junior triathletes from Team Kennet competed at the Twyford Duathlon on the 12th of May.

In the Girls Tristars 1 (9-10 years), Anna Hall was one of the youngest girls and had a great race, finishing in seventh place, showing very good pace on both of her runs.

We had three boys in the Tristars 1 (9-10) race, two strong runs helping Ethan Kuijten lead the way home in sixth place overall, followed by Harry Barnes in 26th and James Lake in 36th.

It was great to see all Team Kennet competitors pushing themselves so hard and all finishing with a smile on their faces, the training must be paying off!

If any other kids in the club are interested in triathlon training, please send Bart an email: bart_kuijten@hotmail.com

Three TK athletes competed at The Immortal, based at a beautiful National Trust Property at Stourhead in Wiltshire. It was a beautiful day too, but a tough course. The swim was 2 laps of a picturesque lake in the grounds of Stourhead House. Phil was first of the TK athletes out of the water, followed by Emiliano and then Katie. Next was a 500m uphill run to Transition. This was to be first of many hills. The bike course was three laps of undulating country roads. The road was rarely flat, with lots of long grinding uphills followed by satisfying downhills. And the run – a rounded-up 14 miles rather than the usual 13.1 miles – was also three laps with along hill taking up about 1/3 of each lap. Overall, a challenging course, as evidenced by the winning overall time (04:52:24) which is a good deal longer than most middle distance races.

TK results are below. Notably, Katie was 4th in her age group. Also, both Phil & Katie were 3rd in the swim for their age groups.

Other competitors included Mireille Cook (05:55:04) and Sue Van Huyssteen (06:42:48) who are both locally known to TK members, and both of whom finished 1st in their respective age groups.

It was a good day out at The Beale Beastie for Team Kennet. A shortish but testing route saw Bart taking 1st veteran and 4th overall, Sammy 2nd women overall and 2nd in category, and super vet podium places for Mark D and Gavin. Simon was 8th overall, while Rog finished in the top five in his age categories.

TK results are below. Notably, as well as the age group positions above, Sam was 1st Female in the swim, 2nd Female in the run and 3rd Female on the bike. And finally, Bart, Mark D and Mark L all improved on their times in the same race last year.

At the international level, Marion Templeman scored an Age Group 1st place in Barcelona in a time of 05:41:50!

Team Kennets Rose Metalli took part in the Oldbury White Horse Aquabike event held at Calne Leisure Centre on Sunday 5th May. The event is a 400 metre swim followed by a testing 20k bike which steadily climbs up to Oldbury (Cherhill) White Horse with some stunning views and fast descents back into Calne. Rose completed the swim in 7min 34 the cycle ride in 43.36 and the short run of 41 seconds to the finish giving her an overall time of 53.33 . This was enough to secure 1st female ahead of 2nd placed Jane Taylor from Lincsquad and 3rd placed Erica Henson from Abingdon and Vale Tri Club. Rose led from the swim and despite Jane coming back strongly on the bike, Rose’s experience , especially through the transitions, held on to win by 20 seconds

Team Kennet Triathletes were out in force on Sunday in the Andover Sprint Triathlon, very hot conditions on the day saw 11 club athletes race the 440m pool swim, 30km bike and 8km run.

Martin Colston claimed another prize as he finished 18th but took 2nd Male senior vet in a time of 1.43.47 and Chris treacher also in the same age group was awarded third place as he came home in 21st place overall 1.47.09

Kate Monk was the clubs only lady taking part and she came home in 4th place in 1.54.06

Support will include the upcoming winter camp which takes place in Rio Major, Portugal this month as well as a summer camp next year and other key areas:

The aim of the England Talent Squad is to bring together the best young triathletes in England and to be a key stage in their journey along the British Triathlon Performance Pathway. Athletes including Olivia Mathias, Sophie Alden, Ben Dijkstra and Alex Yee have benefitted in recent years and are progressing to U23 level having won major junior medals and having secured University places.

The programme aims to enable personal and athletic development through the provision of opportunities and experiences which will add value to athletes current and future careers. Additional athletes will be added to the B Squad in the new year. 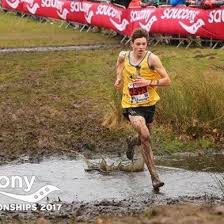 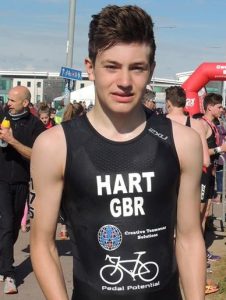 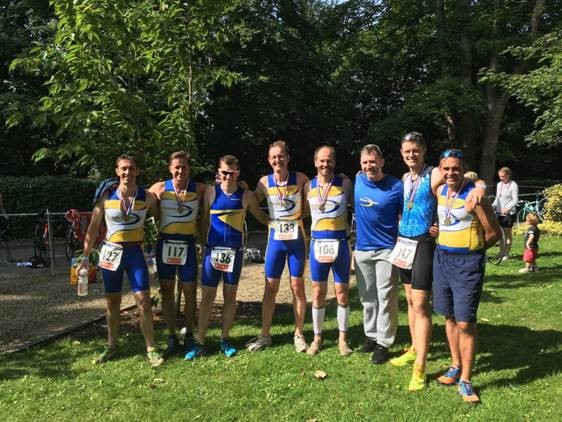 The Oxford Sprint Triathlon held yesterday was the 7th race in this year’s TK Triathlon Series and also the Club Championship.

8 Triathletes competed on a warm and sunny day – I think we were all grateful that the race was largely done by 10:30 before the “hottest Bank Holiday of all time” really got going.

As in previous years, the event was well organised in general, with plenty of friendly marshalls. On the plus side, the revised run course was a bit easier on the feet (less rutted off-road path, more playing fields). On the negative side, the post-race refreshment was from a tiny overwhelmed coffee van, rather the big table of homemade cakes seen in previous years.

TK racers were well divided between separate waves, so there was little real-time racing. That said, overall race times were quite close, with many of the TK contingent finishing less than a minute apart. That wasn’t the case, however, for Simon Whatson, who finished more than 4 minutes ahead of Dan Wright. Simon was 3rd in the race overall, and also claims the TK Club Championship with this result. Simon also had the fastest split in bike and run. Emiliano had the fastest swim split. Also notable is Martin’s result – 2nd in his category.

Unfortunately, there weren’t any female TK triathletes competing, so there will be no female club champion this year.

* Note that the timing mat was quite a long way from the end of the pool where we got out, and we were strictly told to walk-not-run out of the pool building. Those are not true 400m times! 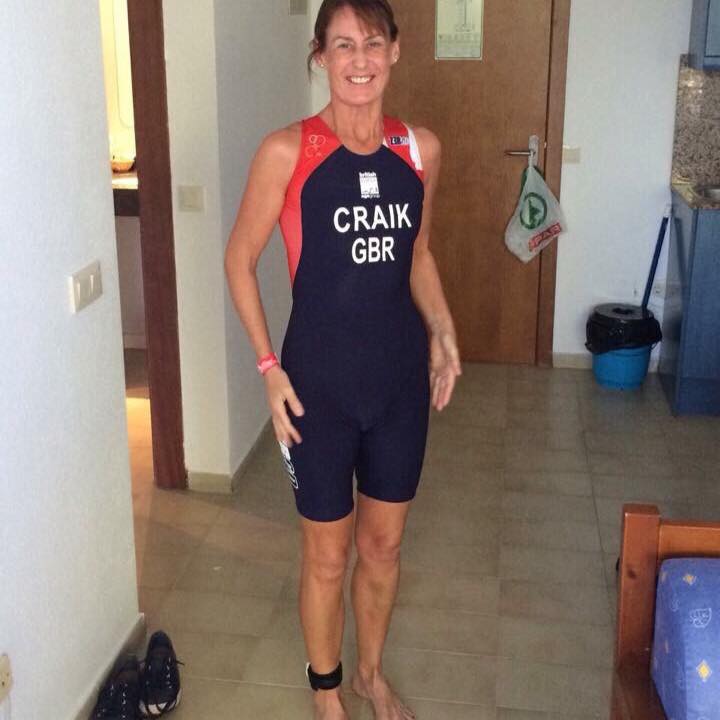 Team Kennet’s Carolyn Craik added a major title to her name and in the long list of international honours of podium athletes who have finished in the top 3 of international events in the club by winning the World Age Group Long Distance Triathlon Championships held in Canada over the weekend, Craik who is in the 50-55 age group managed a time of 7hrs 11mins and 51 seconds over the 153km course, firstly the Swim of 3km clocking 54.58 and then a superb Bike leg of 120km clocking 3.43.54 then on to a hard run of 30km in 2.26.08 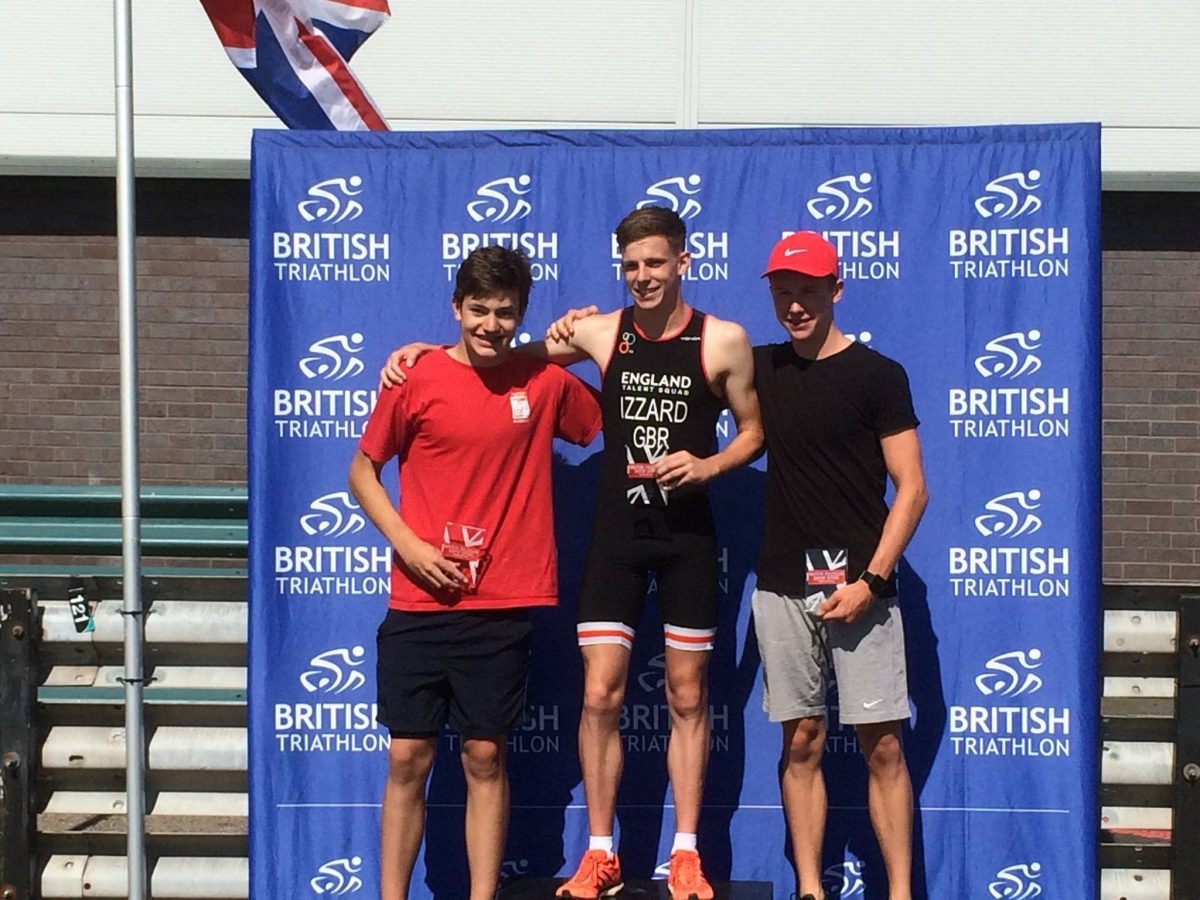 Team Kennet’s  Sam Hart came third in the British Triathlon Junior Super Series over the weekend held in Mallory Park in Leicester, Hart had to swim 750m then Bike 20.5km and then run 5km