Team Kennets Stuart Bladon took part in the English Schools Octathlon Finals at Boston in Lincolnshire over the weekend, Stuart in his first year of the age group produced a life time performance to finish in 4th place and earn himself a England Vest to compete in November at Glasgow.
On the Saturday the long jump was the first event where stuart lept to a new personnel best of 5.98m, just 30 minutes later he threw a whopping 31.76 in the Discus achieving yet another best, this was matched in the afternoon with a another new best throw in the Javelin the longest of the day from any of the age groups throwing 49.47, end of the day was the 400m where Stuart again rose to the occasion clocking 53.44 just outside his best, after day one Bladon was in 6th place still in contention.
Day 2 started well for the Down school pupil, coming second in the 100m hurdles with 14.5 again just outside his best, an hour later his favoured event the high jump saw him clear 1.83, with the weather turning for the worse he was still within a shout of the fourth place, a 9.79m shot throw was a much weaker throw than normal, but with the 1500m event one of his best events where he gains so many points on his arrivals, he took full control and won it by a long way in 4.32 moving him up to fourth place and scoring 4922 points to move him up to 7th in the UK rankings. 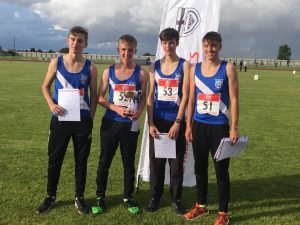 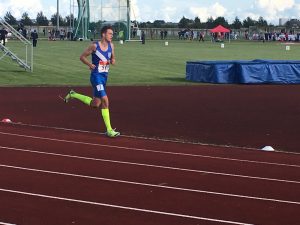