Team Kennet struggled in their second match of the Southern Athletics League with injuries and exams for younger team members but those who turned up made up with some superb performances down on a very sunny Ashdown Track in Poole, which fell on a Sunday for this match.

Host Club Team Dorset took full control to win the match, a welcome return from the States Alex Hanson made sure he had a hatrick of wins, Firstly in the 800m he took a convincing win in 1.58.8 by over 50m, next up was the 3000m, playing with the field he adventually broke cleat on last lap to take his second win of the day in 9.11.6 and some 45minutes later went on to make it thre out of three in the 1500m clocking 4.09.8. Team mate Ben Schiffer-Harte teamed up in all three events with Hanson coming 3rd in the 800m/1500m and second in the 3000m.

Another welcome return was Peter Saunders, he won a two A strings first the long jump with 6.01 and later the Triple Jump 12.51, he was well backed up by Joe Osler in the B string leaping to 5.71 for a win and again another B string win came from Stuart Bladon 11.89,

Luke Angell won his Javelin with a 50m throw, while in the High Jump Joe Osler cleared 1.80 for 2nd place which was matched by Bladon in the B string 1.75.

The womens team ended up with two injuries right at the start weaking the team, but still some good performances, Izzy Hole made her debut in the 1500m Steeplechase event coming second with 6.01, Emily Faulkner came 2nd in the 5000m clocking 20.21.2 breaking the clubs under 20 record. 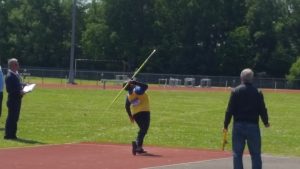 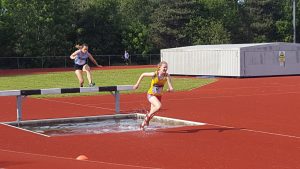 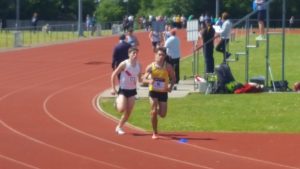