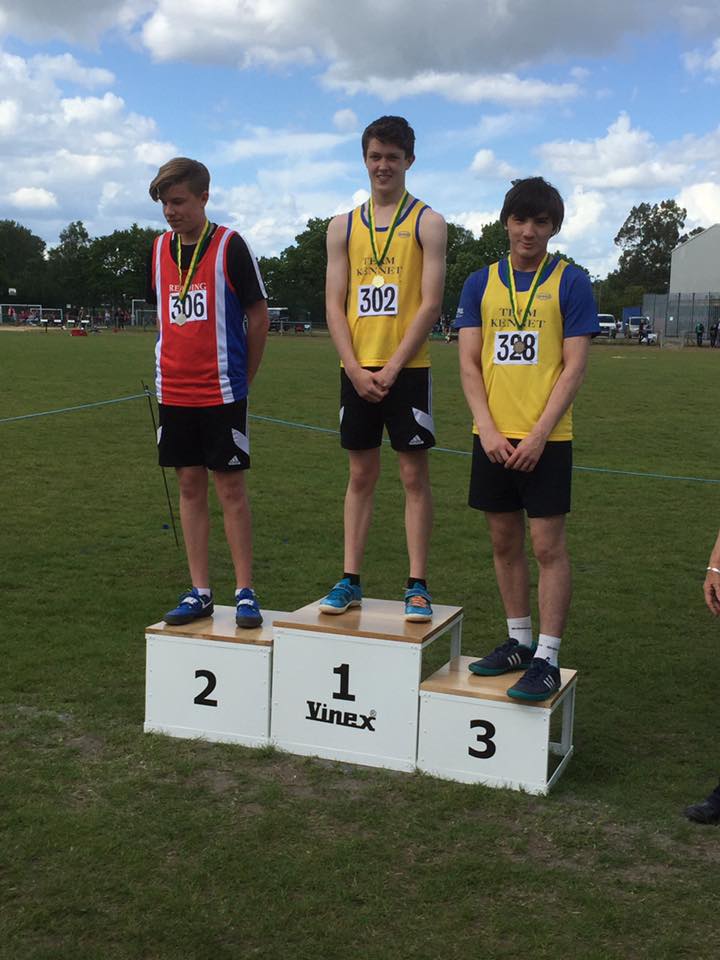 Team Kennet Athletes secured a massive medal haul at the Berkshire Track and Field Championships on Sunday at Bracknell.

Performance of the day was from under 17 athlete Stuart Bladon breaking a club 13 year old record and winning the County Title in the 400m hurdles clocking 59.63, he then went on later to win Gold in the High Jump in 1.80. Zach Montgomery also struck gold in the same age group in the Shot 11.79 new p.b. and 4th in his heat of the 100m 12.3. The under 15 age group Gold went to Harry Booker in the Discus throwing 35.40 just missing the clubs record which is now in sight, he also got Silver in the Shot, Oliver Gregory threw to a silver medal in the Hammer and took 3rd place in the Discus and a 4th place in the Shot. Ben East had a rare defeat claiming a silver in the Javelin with a throw just short of his best of 46.84. Pheobe Hoaen also struck a double Gold as she excelled to win the Discus 22.78 and Javelin 32.15 , Anna Pettit made sure she got into the medals, leading most the way in the 1500m had to settle for Bronze in a time of 4.59 just 1 second off gold. Charlotte Booker threw a massive personnel best and new u17 club record in the Hammer to earn herself a Bronze medal. In the Senior mens Javelin Luke Angell took another Title and Gold winning with a below par 51.67

Other athletes who went were Anna Montagne u15 girls 100m 13.3 and 200m 27.4 to reach both finals but not placed. The under 13 quadrathon saw Oliver Humphrey, Kian Hockaday and Harry Davis finish mid way, Humphrey jumping 3.97 best of his events in the long jump, where both Hockaday 1.59.8 and Davis 1.57.7 in the 600m their best events.

Over in America senior athlete Nathan Gillis took part in the Annual Southland Conference Championships held in New Orleans, Nathan reached the final to come 10th in his fastest time this year in the 800m of 1.53.24

Elsewhere the club athletes were out in force, the Park house School 10k and Fun Runs, saw Emily Faulkner win her second race in 8 days as first Female home clocking just over 43 minutes, while in the mens race Simon Whatson a previous winner of this race had to settle for 2nd place. Bethan Philp was 1st female in the 5k race, while in the younger 2k race it was Kirsten Fraser that took a 2nd place in the girls race.

Sam Hart (junior) came 18th in the first round of the National Youth & Junior Triathlon Championships in Llanelli over the weekend and younger James McLaughlin (youth) came 13th in his race.

Cameron Langley took part in his first ever Duathlon for the club at Beachborough.