Team Kennet Juniors were in action at Kings Park Bournemouth for their first fixture of the Wessex Young Athletes League, last year’s runners up in the league, saw a much depleted team come second in the match narrowly beaten by City of Salibury.

The under 15 boys were second in their age group match but it was Ben East making the highlights yet again as he threw a massive 47.36 to break the club Javelin record and keeping him at UK number 2 and winning on the day.  He joined with team mate Toby Thomas in the shot to come 2nd in their strings and in the long jump Tom Hills jumped 4.64 to come 2nd. On the track Ed Smith secured a B string 100m win and a 2nd in the 200m, and the 4x100m relay team of Hills, East, Thomas and Smith came home in 2nd place.

The under 13 boys a lot stronger in depth in the club than previous years saw another age group second, Gabrielle Warley leapt to 1.44 to win in the high jump and team mate Matthew Jones cleared 1.30 to win the B string both gaining personnel bests. Both boys teamed up in the 100m Jones coming 3rd in the A string 14.7, Warley came through last 30m to storm clear to win the B string 14.6, William Jones fared well in the 1500m finishing in 2nd place 5.24 and Digby Riggall taking 3rd in the B string. 75m hurdles George Mackie and Jones both were 3rd clocking 17.5 and 17.6, the 4x100m relay team went one better coming 2nd making up the team were Jones, Hockaday, Warley and Woodrow. Back in the field on the throws a double win came in the Javelin Kian Hockaday 29.79  and Colin Sinclair 23.36, Discus Thomas Woodrow 3rd and George Mackie 2nd and in the shot both Sinclair and Riggall were second.

The Girls section saw the under 15s best of the age groups finishing 2nd overall, in the throws a double win came in the Javelin with Phoebe Hoaen throwing 33.08 p.b. and Sophie Wheadon 19.62, both girls made it another double in the Discus this time Wheadon 23.81 and Hoaen 22.55 and non Scorer Poppy Bladon throwing 19.40. In the Shot Wheadon had to settle for fourth place 7.55 but a personnel best from Chloe Collins 7.46 secured another B string win. The High jump saw a fantastic competition Anna Pettit clearing 1.40 for only third place and Ellie Armstrong stepping in at last minute cleared 1.30 also for third place. in the long jump Anna Montagne lept 4.78 for 2nd place. On the track good points came in thick and fast, the 300m best of all with Anna Pettit taking a win 45.4 and Georgina Thomson just edging in to second B string, in the 800m Pettit had to settle for second place 2.27.2 and G. Thomson winning the B string 2.38.9, the longer 1500m race both girls came 2nd Molly Jones 5.16.8 and Rebecca Thomson 5.28.

The under 17 women were fourth on the day but the three girls worked hard, in the 1500m Izzy Hole came 2nd 5.21 and a new best for Rosa Lawrence 5.24.9 for a B win, both Girls teamed up in the Shot for good points then tackled the 300m both coming third in their strings, Kira Angell dipped under the 14 seconds barrier in the 80m hurdles clocking 13.9 for third place, then clearing a seasons best in the High Jump 1.50, then having to run to the Javelin to come 3rd with 26.26m.

The under 13 girls also secured a fourth place with some good performances as the team were made up of the younger u13s, Emily tucker came home for second in the 800m 2.53.5, Beth King taking 3rd in the B string 1200m , in the 70m hurdles Lottie Absolom came 3rd A string and Annabel Gibson taking a B string win. in the field Absolom came 2nd in the High Jump 1.35, The shot saw Tucker coming third A string with Georgina Passmore taking a B string win, and tucker came 3rd in her Javelin while back on the track the 4x100m relay team of King, Absolom, Gibson, Dickson came 4th. 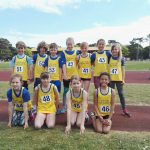 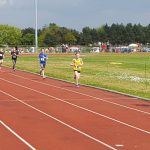