Team Kennet’s Sam Hart made his Debut in an England Vest in the Home Nations International Cross Country held at  Margam Park Wales over the weekend. In the under 17 mens race he did not disappoint finishing in an impressive 6th place only 10 seconds off an individual medal, the race winner was Darragh McElhinney from Ireland, Sam’s performance with his England team mates was good enough for a team win to end the cross country season. 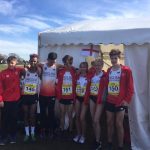 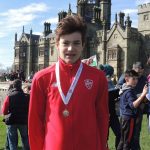