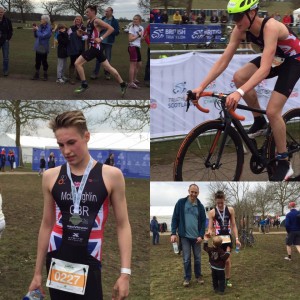 Two of the Club’s Junior Triathletes competed in the British Elite Youth Duathlon Championships.  Sam Hart and James McLaughlin, were competing at the Windsor Duathlon, which took place in the Great Park.  This race was also the first event in the British Triathlon Youth Super Series for 15 and 16 year olds.  The high class field from all over the UK had 60 entrants, meaning that racing was going to be fast and furious.  The first leg was a 2.5km run up and down the royal mile.  Sam Hart had a great first run setting off on the cycle leg in 7th Place just behind the lead group.  James in his first year in the age group had a solid first run coming home in the main pack in 31st place.  Sammy’s form continued on the 10km bike round a loop that took in the Copper Horse Statue, he battled with the 5 other athletes in his group before setting out onto the run course with them again in 7th place; after a final swift 1.25km run he held his position coming 7th overall in 32:44.  James meanwhile was having a fantastic bike leg working his way through the field to 14th place by the time he left transition 2 and began the last run, he fought hard and came home in 16th place overall (the third highest athlete from the lower year) in 33:29.  Both boys have had a shown great promise for the triathlon season ahead.