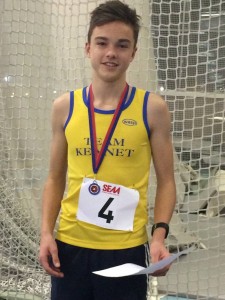 Team Kennet had two athletes take part in the South of England Combined championships held at Lee Valley over the weekend, Stuart Bladon took part in the Under 15 Pentathlon he came away with a well deserved Silver Medal, his first major Athletics award, on his way he broke four club indoor records for his age group, on the day the first event was 60m hurdles clocking 10.37 put him in 8th place, this was his weakest event, an hour later it was the long jump leaping 4.51 (NCR) this kept him in 8th place, but a fairly good Shot throw of 7.99 moved him up into 6th place, his favourite two events were next, The high Jump his best event he cleared 1.62 to finish 3rd best on the day this kept him in 6th place but gave him a chance for a medal knowing he had to run a best time and beat all the runners, he came close to this clocking 2.17.38 (NCR)for second but some 20 plus seconds in front of the guys in front of him, this secured a Silver medal with 2100pts setting a new club record of points.