Team Kennet Athletes were in action in the Second round of the Oxford League Cross Country on Sunday at Culham.

It was the u13 Girls that stole the clubs honors, anther great turnout from the girls ensured they boosted their chances in the team awards at the end of the season, Anna Pettit returning back to form secured her first win of the season looking so strong on the hills and gliding through the mud, she helped the team to victory with Lucy Wells 5th and Rebecca Thomson 14th, The B team are also within a shout of awards as twin sister Georgina Thomson came home in 18th, Lucy Draper 22nd and Phoebe H 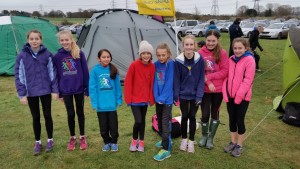 James McLaughlin was the best male finisher from the club as he came home 2nd place in the under 15 boys race , Josh Livingstone 16th and Bradley Thomas 20th saw the team home in 6th place.

Alex Hanson continued his great form this time finishing in the senior race in 5th place and 2nd out of the u20s, Lee tolhurst was next home in 24th followed by Sam Llewellyn on his debut for the club in 35th, Gavin McLa

In the Senior Ladies there is a close battle between the three girls, Helen Preedy getting the better this time in 19th place with sue Francis 23rd (2nd Vet 45) and just behind Rachel Bladon 27th (4th Vet 45) and Georgina Bradford 56th (4th u20) brought the team home in 4th place in Division 1

The under 13 boys were depleted this time around, Toby Thomas took full advantage of this in the club by finishing 15th, just ahead of Oliver Bazin 17th with Scott Richardson 30th and Joshua Sells 33rd for the team to finish 6th

The younger races saw some 25 athletes from the club turn out, in the u9 girls Zoe Allen came home in 9th with Ava Elverson 10th and Catherine Jones 16th, in the boys Kian D Arcy Masters 15th, Josepth Hoaen 17th and Henry Morgan 18th